Maryann a.k.a. The Baegod had busy start to the year with her Good Vibe Co. featured DrewsthatDude and Fortune remix of “Landing”, and the EDM.com premiere of “Walls” with Tev Woods. She released “Na Na Thas A No No” the first single from her upcoming “Bedroomtrap’n” EP. For her second release from her new project, the California artists enlists Atlanta’s Waka Flocka and Bay Area rapper and frequent Brick Squad collaborator A Wax. The production from Sbvce is a mix of WestCoast Funk and Down south swag with an Electronic undertone. 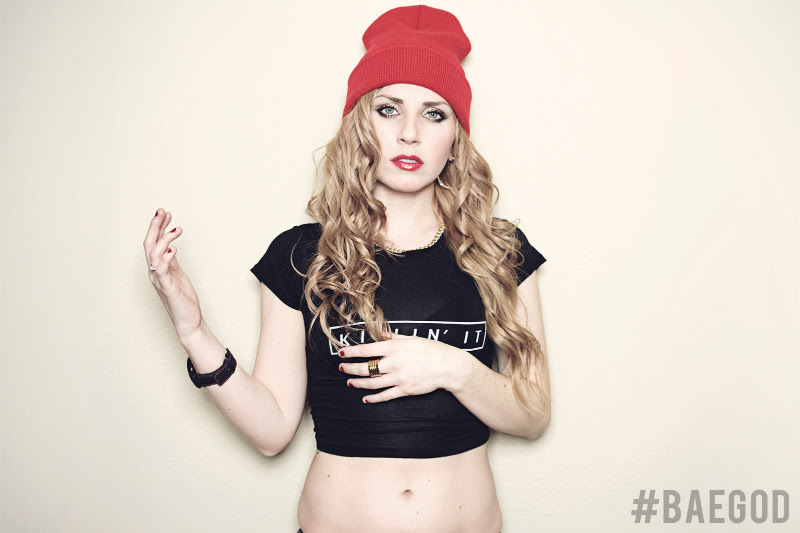 Early Last year California singer/rapper Maryann a.k.a. “Baegod” released “Futuristic Always” garnering herself attention with songs like “You and Me” and “#Cookingforbae”, from which she recieved the catchy nickname. The Future R&B artist has dropped numerious loosies like “Soulm8s” which got a popular remix from Buygore Records artist Ash Riser, and “Fuccboi” which has become the new fan favorite. Her “This Is What The Moon Sounds Like” EP got great reviews from supporters like The Smoking Section and Ashley Outrageous. People have taken to her unisound, which shes been calling “Bedroomtrap” for a few years. It’s aggressive yet feminine, Urban and Electronic, The name stems from the mix of Trap sounds with sultry R&B and vocals. The name also refrences how she and producer Sbvce make music from the bedroom in a truly independent way. Already this year Grammy nominated producer DrewsThatDude and Flow-Fi Co-Founder Fortune released a popular rework of “Landing” from her latest project. Last month She was featured on Trap Door record’s artist Tev Wood’s debut EP with the song “Walls”. The song has gotten such a big response already! What people really like about Maryann is her ability to transcend genre’s effortlessly. She Moves from 808 drenched Trap tracks to moody electronic or Boom Bap productions without missing a beat. Maryann is currently working on a new EP called “Bedroomtrap’n”. The first single “Na Na Thas A No No” released last month, “Side Buster” ft. Waka Flocka and A Wax is the second offering from the project. She is also working on writing songs behind the scenes and collaborating with other artists for her upcoming project. Expect to hear a lot from the #Baegod in the weeks to come.

About The Song:
Even in these cynical times, some people still believe in true love. Sacramento experimental hiphop group #THEBAREXAM captures the feeling and opens up their world in “#MarryHer(Gr8Mix).” In describing his “magic spell,” emcee MICjordan explains “I wrote this shortly after meeting the love of my life. With this song, my goal was to speak the destiny I wanted for us into existence.” Watch that destiny come into fruition in their new music video, which chronicles his real-life wedding in Sacramento, CA. Produced and mixed by West Coast hiphop legend N8 tha Gr8 (The Cuf), this special video event was filmed, directed and edited by Maryann Hunter of N-Crowd Media.

About The Artist:
Emcee MICjordan and emcee/producer WesttKraven (aka TheGreenRoom) are #THEBAREXAM. Rejecting the notion that hiphop shouldn’t challenge its audience, the Sacramento, CA duo takes pride in making music the so-called ‘wrong way,’ teaming up to create unconventional underground sounds for over a decade. Dense, multilayered lyrics ride, float, drift over, and crash through soulful, noisy, off-kilter, low-fi instrumentals to create a demanding, rewarding, and most importantly authentic post-pop hiphop soundsperience.

West Coast emcees Chuuwee and Takticz team up on this N8 the Gr8 produced track “Y.N.S”, the first release from their upcoming project together.

Dir by: N8 the gr8 & Maryann
Edited by: Maryann

Written by: Maryann & N8 the Gr8
Hot off the heels of her Dub style Rap release “Nothing You Could Say”, Maryann shows that she’s still rocking with the sexy Bedroom trap style her and producer N8 the Gr8 created.  Something for the fans of her “Timing is Everything” album, but spacey enough for her new “Futuristic Always” project.  “Love Music” is an ode to 90’s R&B, but definitely has it’s own appeal.  With a visual to match this “Baby-making” track might find you doing just that.  Enjoy!


Maryann turns up the heat with her brand new single “Nothing You Could Say”.  Far from a loss of words, Maryann takes a sharp turn from her RnB songstress role and gives you something new.  After pairing with underground Hip-Hop producer N8 the Gr8 she released a full length, true- to form RnB record last summer.  Since the release of her album “Timing Is Everything” Maryann has put out five tracks/visuals from her upcoming release titled “Futuristic Always”.  The new record is already sprinkled with features from the likes of Devin the Dude, Guilty Simpson, and Chuuwee.  Aside from writing her songs and songs for others, dabbling in production and graphics, she is also co-directing and editing numerous videos including this one.  Maryann is proving that she is not a one hit wonder and is more of the new style hybrid artist it takes to make a lasting impression.  The song and visual are her commentary about the industry, and feelings she has built up during her recent experiences.  Packing more than a punch, this is not the first, or last you will hear from this blossoming artist.